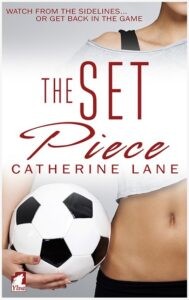 Smart and athletic, Amy Kimball should have it all, but her life’s in a tailspin. She’s working two menial jobs to make ends meet, barely a paycheck away from financial disaster, and women aren’t exactly lining up at her door.
Enter soccer star Diego Torres, who’s keeping a big secret: he’s gay. His manager fears that if he’s found out, his endorsements and his chance to play for the national team will evaporate into the wind.

Amy jumps at the chance to act as Diego’s fake fiancée, even though it means signing her life away in a non-disclosure agreement. On the surface, the job couldn’t be better: the money’s great; the living accommodations are luxurious, and she gets to watch her favorite soccer team from the players’ box at the stadium.

But she soon realizes that this new life is even harder to navigate than her old one. Diego’s manager is as sleazy as they come, and this easy job soon turns complicated, possibly even dangerous. More important, all the lies Amy is forced to tell are starting to eat away at her soul, especially when she finds herself attracted to Casey Palmer, Diego’s pretty assistant.

Will Amy watch from the sidelines, or will she find the courage to get back into the game?

“I highly recommend it as an entertaining, romantic read with a dose of social commentary that lends it weight and credibility.”
– Elizabeth Hayden –

“I purchased this early this morning and couldn’t put it down, it’s a fantastic written story, the character’s just pull you in. I loved it excellent job.”
– Tinna Webb –